It's finally here, summer...which means that after tonight, it's a slow but inevitable downward slide into the darkest time of the year...a time I might actually prefer in some respects. It's so much easier to turn to a good book while tucked under a down comforter or crawl into bed and watch a movie on my computer when it is cold and pitch black outside. I feel guilty right now for wanting to stop working outside at 8 pm because it is still so light out!
The Mayans had a 360 day calendar round that they followed, with the last five days of the year considered a time of bad luck. Called the Wayeb or Uayeb depending on which interpretation you read, the opening between the Underworld and this world was much closer during those five days and all kinds of weird things could happen. The hieroglyph used to depict this time of the calendar was a picture of a stone "with a U-shaped skeletal maw on its top" (Ancient Maya World, p 253.) The Mayans believed the Gods could descend and deliver all kinds of disease, death and decay, so to prevent this, they conducted special dances and offered a variety of sacrifices.
The Mayans observed both the solstices and the equinoxes as well as the movement of planets, especially Venus. They are well-known for their accurate astronomy and various buildings like the Observatory at Chichen Itzá and another at Mayapan.
Posted by Lee Cart at 5:08 PM No comments:

Today is the third day in a row that my on-line job has not had work for me. Day one felt like a holiday and I went off to get my hair cut, did some necessary errands, and even went to the bookstore and bought a new book with the 40% off coupon I received via email. Being in the store, looking at all the published novels made me want to rush home and write, which I did do over the weekend, adding another 18 pages to my novel draft.
Day two with no work turned out to be annoying as it was Monday and I was ready to be at my desk. Instead, I went mattress shopping with my husband, which turned out to be a tiring and tedious task and we came home empty-handed. (Any suggestions on a good mattress for around $600-$800 will be greatly appreciated.)
Today, Day three--only a short amount of work to do this morning and then nothing. I have felt out of sorts, discombobulated, unable to focus this morning on much of anything, especially writing, so wound up stacking firewood. It felt good to move, good to see the wood pile growing ever larger inside the shed instead of out in the rain. I also came to the conclusion during this therapeutic exercise that maybe the universe was trying to say something to me these past couple of days. That maybe, this job is not where my life is really at. Sure, it is paying the bills right now, but if my true goal is to be a writer, more specifically a travel/travelling writer, then maybe instead of fretting about the lack of work, I should be working on writing about my travels.
So, on that note, I just took a leap of faith and signed up for an introductory lesson from MatadorU for their Travel Writing program. For ten dollars, I can try out the site and lesson for a week, if I like it, I pay the remaining money, if not, I cancel and I'm only out the ten bucks.
Based on what I have read so far, I think I will stick with the program. And because of that, some of my blogs in the months to come may seem strange when in fact, they will really be assignments for this on-line writing course. They recommend using the MatadorU blog site for a space, but offer the option of using your own blog site if you already have a blog started. Since this blog exists and the thought of trying to maintain two made me slightly ill, I posted this site as my MatadorU site. That means some postings will be assignments and may have feedback from other students enrolled in this program. It also means I will probably be able (finally) to focus this blog into what I had originally started it for which is to write about Maine and Mexico. So, that's the news for now, hope you come along for the ride.
Posted by Lee Cart at 1:27 PM No comments:

It's the 7th of June, summer is rapidly approaching and it feels good to know I have over 2+ cords of split wood drying in my backyard. For, here in Maine, once the spring rains cease, it is time to think of firewood and winter.
My husband always comments on how I think several steps ahead in any given situation--knowing what to purchase at the store so I can make dinner for friends three nights from now, knowing what supplies will be needed if we decide to put down the new flooring in the foyer, splitting wood now even though it is June and the beginning of summer, etc. I think it comes from having lived closely with nature for the last 25 years or so.
When one season finally arrives, it means another is just around the corner, so one must prepare for that shift while enjoying what is presently on hand. So, while I enjoy watching the garden grow, I am also splitting wood and washing and sorting winter clothes because all too soon, we will need these things in our lives again.
Plus, I hate to be cold, so knowing that I have physically done much of the wood this year will give me added pleasure this winter when I throw another stick of dry maple or birch in the stove. And as they say here in Maine, firewood warms you twice, once when you split it, another when you burn it. But, I think I counted six ways that works--once to pitch it in the truck, twice to unload it, thrice to split it, fourth to stack it, fifth to bring it into the house and sixth to fill the stove.
Posted by Lee Cart at 4:44 PM No comments:

I had every good intention of writing at least a short blog last night. Then my son came in the house around 4:30 with the news that our area was under a tornado watch and severe thunderstorms were headed in our direction. For the next four hours or so, we stayed in the house with the radio on, listening for weather updates and watching the storm as it passed. At one point, the sky turned a creepy purplish green and the wind and clouds were swirling round and round. We were all prepared to dive under the stairs at that point, but fortunately didn't have to.
I was a bit apprehensive the whole time though. Back in 1974, when I was nine, I was in the middle of the what was then the largest series of tornadoes to touch down in Alabama. We were staying in our travel trailer  at a friend's house, en route to Maine, when the storm approached. My parents were persuaded to stay that night at the friend's place instead of continuing north to the next campground, several hundred miles away. It was a nightmarish night with branches breaking and dropping on the tin roof of the camper, howling winds, heavy rain, etc. The next day, we did continue on our journey. We went past the campground where we would have stayed if not for the storm. The whole place was flattened and several people were dead.
Add to that the fact that in 1998, I was struck by lightning while inside the house-- the bolt hit me on the right foot, travelled up my right leg, crossed my chest, shot down my left arm and flew off my left index finger as a flash of blue light--and it makes sense that this kind of a storm would leave me kind of edgy.
Here's a poem I wrote several years ago about the storm in Alabama:


One Night in Alabama
Branches breaking
slithering and sliding
like water moccasins
on the aluminum roof.
Rain drums deafness.
My bladder aches full.
Huddled in my bunk
sticky, sweaty inside
the sleeping bag,
freight-train whistle-winds
rock, roll, lift, and lurch
the tin can camper that we’re in.
The dog whines, cowering
in the corner by the door.
Agitated whispers—dark
parental shadows crouch
over the radio. Static crackles:
funnel clouds in Marion county.
Megawatt flashes slash
the blackness cutting zigzags
in my eyes. I clamp the pillow
over my head. Smothered
into a nightmare, I startle
awake with urgent need.
Peeing sweet relief
into soft, black mud,
wet leaves stick
to my bare feet. Raindrops
on the roof spatter.
Daylight hugs the horizon.
In a campground in Tanner,
two hundred miles north,
everyone is dead.
Posted by Lee Cart at 5:44 PM No comments: 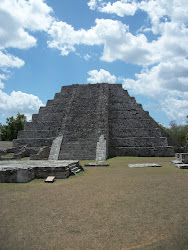